Two points are involved, perhaps more in the end, with getting this timeline together. The first of which was deciding how much time should pass before it was believable the first war occurred. As mentioned before, this world is not an Adam and Eve like society where it started with two people and from those two people all of mortal kind stems. The first conflict is between two races of people; the Sylvan, the children of Danu, and the Sidhe, the children of Erebh. The Sidhe are in essence created in secret and hidden from the rest of the world, so their procreation can be watched and managed with absolute care. With that evil kept secret, the other races can be watched as well, though not in the same way. Regardless, there is nothing hampering their procreation. And since they are not like Adam and Eve, they are placed in numerous places within each world, to grow in many realms. So, with roughly 150 years, I hope it is believable but I still wonder.

The next point of worry is the statement in the story that, within the world of Demeteria, the Ageless Empire lasted for 1,000 years. So I have to struggle into stretching the timeline out to make it believable for a few hundred years of history prior to the Empire’s rise, a few hundred years after for the unification of the Elves into their new nation, and the final lead in to the current timeline of the story in Repeating History. Once I have the elven part of the timeline fleshed out, I’ll have to work on the human end again, and fix their end to match the Elf timeline, but that will, in the end, include pretty much doubling the content I already have there, which will be rough. And then of course, there’s the nearly 2,000 years of Dwarven civil conflict that weaves in and out of it, and blends with both human and elven histories. Both Elven and Dwarven are in the works at the moment, but I will be focusing on the Elves first. 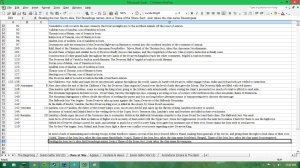 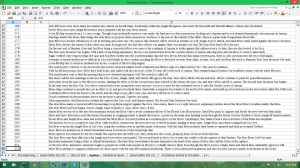